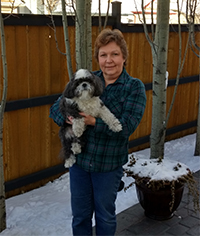 Originally from Lethbridge Alberta, Cindy always had dogs and cats as part of her family, as well as a couple of horses.  Prior to attending Olds College she was employed at a mixed animal practice in Lethbridge where she developed a love for veterinary medicine.

Cindy attended Olds College in the Animal Heath Technology program, graduating in 1986.  She worked at various small animal practices in Edmonton, Calgary and eventually Lethbridge where she and her husband settled to raise their two children.  She returned to Calgary in 2000, building a new life in a big city. After working for various practices including a long employment at Western Veterinary Specialist Centre in radiation cancer therapy, Cindy joined the family at Midlake Veterinary Clinic.

Over the past several years, her home has been a haven for a few rescued cats and a kitten.  In 2004 she added a Shih Tzu puppy named “Buster” to her family who is a delightful, fun-loving boy.