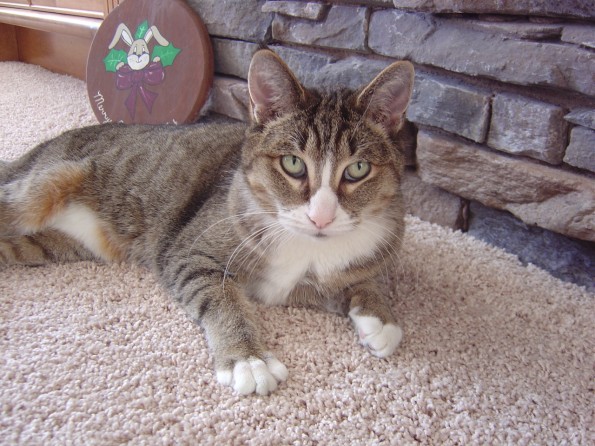 Murphy came into my life rather unexpectedly. At the very young age of 6 months, she was presented to me as a veterinarian for, of all things, euthanasia. Imagine my surprise when I saw this gorgeous, vibrant kitten with the brightest pink nose, brightest pink toes and the cutest, tiny lynx-like tufts on the fringe of her ears presented before me. When I asked the owners why they were wanting her euthanized, I was mortified to hear “she chases birds”. No thought of keeping her indoors, or trying a collar with a bell to give the birds forewarning, the owners had made up their minds. Knowing that chasing prey was a very natural instinct for all felines, I offered an alternative to the owners. If I could find a new home for this sweet kitten, would they consider surrendering her to be re-adopted? They agreed and she was officially “up-for-adoption”.

My husband, also an animal lover, didn’t even question her becoming a part of our family. He simply went out to the car to retrieve what he thought was “the last bag of groceries” that I needed help bringing into the house. He immediately fell in love with her. Who could resist her? She was so cute and so sweet and bonded very quickly to our other cat, Tabitha and our Labrador, Mia. She was a beautiful brown tabby with some white patches so we named her Murphy after the Murphy Brown character from a popular sitcom playing at that time.

Murphy should have been awarded a medal for bravery when she was a little older. She unselfishly donated her own blood on two occasions to help save the life of another kitten who was very sick. (Being the pet of a veterinarian can be hazardous!) Nowadays, we would do blood typing and matching first to minimize blood transfusion reactions, but 18 years ago, we just hoped for the best. Lucy K. survived and lived to her double digits thanks to Murphy, although her owner felt she was a little feistier than before the transfusions and illness. We joked it was because she had some of Murphy in her.

Murphy was always liked by the staff so if I was away at a conference or on holidays, she would often board at the clinic. She was so used to dogs, a busy reception area full of canines didn’t faze her. With her sweet nature, she would comfortably sit on the top of the reception desk to nuzzle up against anyone who would pet her. As the “official greeter” for Midlake Veterinary Clinic, many clients had an opportunity to fall in love with Murphy and her animated personality.

Murphy lived until she was 20 years old, quite a feat for a domesticated feline. When she was 15 years, and in relatively good health otherwise, she developed hyperthyroidism which was successfully treated with radioactive iodine therapy with minimal side effects. In her last two years, she struggled with chronic kidney failure, arthritis, high blood pressure causing vision issues and finally mental changes. She was a fun and playful cat throughout most of her life and made us laugh repeatedly. She was peacefully laid to rest on June 7, 2015.