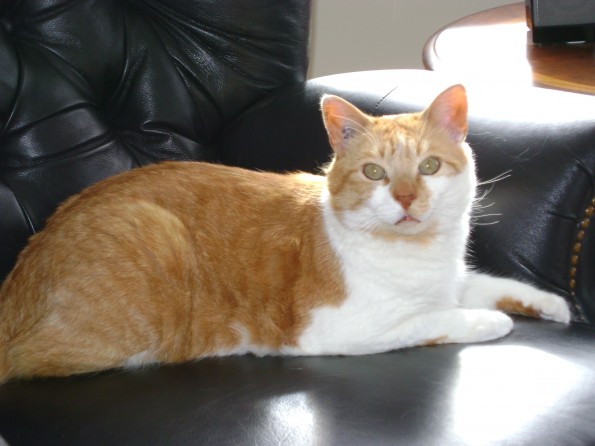 I first met “Oozo” in August of 2005. He came to me, wrapped in a blanket, by a concerned neighbor who found him injured in the ditch by our rural home. He was not bearing any weight on his left front leg and had about 16 “oozing” wounds on his head and neck. He had obviously been in a cat fight, possibly because he had not yet been neutered. Neither the neighbor nor myself had ever seen him before and he had no identification to help localize his owners.

Wrapped in his little blanket papoose with my neighbor holding him, I began to investigate his head wounds. There was trapped infection under most of the scabs that had tried to close off the wounds. Dealing with many cats in my daily work, I was pessimistic this cat would allow any type of medical intervention for this painful condition without heavy sedation or anesthesia. But this unknown stranger simply purred and purred as I tended to his wounds. This was no ordinary cat! I was immediately in awe of his trusting and gentle soul. Dubbing him “Oozo”, he lived with me for the next week or so as we searched out his owners and tended with his wounds. To pill him for his antibiotics, he simply opened his mouth. To wash his wounds, he simply purred. Then he purred some more. He always came when he was called, was highly food driven and I swear he was part dog! He greeted me at the door with a humorous hello that sounded more like a monkey “e-e-e-“. And he would try to talk whenever he yawned so it was very vocal. His favorite game was hockey using a wad of paper as the puck.

About day 10, I became concerned that he was still not walking on his left front leg. His head wounds were all healing nicely but if his leg was also due to a cat fight injury, it should be healing at the same rate as his head. So I took little Oozo to Midlake Veterinary Clinic for xrays. What I found was shocking!

Oozo had 10-20 shotgun pellets in his leg with an old, unhealed fracture of his humerus. He had been shot! There was evidence the fracture had attempted to mend, but not with much bone, only fibrous scar tissue. This was not a new injury, but rather many weeks old. And there were no pellets around his skull or neck to explain the head wounds. This was a completely separate issue.

By now, I have fallen totally in love with this cat! I wanted to help him in whatever way I could and I knew that would be a very involved surgery. The Good Samaritan neighbor had located Oozo’s owners who had been searching for their missing friend. His original name actually had been “Lodo” which is very close to “Oozo”, and he was a mighty hunter for the barn and acreage where he lived. Hearing about the extent of his injuries, especially his broken leg that needed re-breaking to attempt repair, or amputation, they graciously allowed me to adopt Oozo permanently into our home. He had extensive surgery to successfully repair the fracture and lengthen the leg, but it would be many months before I would know if he would ever walk on his leg again. How blissful that day was when I saw him “limp” across the kitchen floor for the first time! We played a lot of hockey from then on to keep up his forearm strength. His limp never resolved, but he never acted painful, always used it and high-fived me all the time… while purring of course.

In February of 2015, Oozo began to lose weight. He had been on the new Hill’s Metabolic diet for weight loss for over a year and had a much improved body condition score as a result. But now he was losing too much weight. We evaluated a geriatric blood panel and urinalysis and found he had sugar diabetes. Since cats usually have type 2 diabetes, I attempted a diet change to a special diabetic dry and canned food combination. Unfortunately, his sugar levels remained high and insulin, not just dietary management, was now required. His body could not produce the insulin naturally, or at least not enough. Twice daily insulin given under the skin, he tolerated his treatment well. However, he continued to lose weight, despite good control of his blood sugar levels. He was not eating well, vomiting and having diarrhea, which is very atypical in a well regulated diabetic. Repeat bloodwork and urinalysis showed non-specific protein loss so another physical examination was performed. Sadly, it was discovered that he had cancer. Concerned about his deteriorating quality of life, and potential for pain, Oozo was given his final rest on June 7, 2015, purring until the very end.